When we first started on our journey to self-sufficiency and decided to raise our own meat, I think I may have had a somewhat romantic idea about raising chickens. I assumed we’d be able to keep a decent size flock that would give us both eggs and meat. I guess I figured that we’d keep more chickens than we needed and would occasionally cull a bird whenever we needed one for supper.

Well, We tried that and quickly found that backyard chickens that lay eggs were clearly not the same ones you find in the meat isle at the grocery store. All that work of butchering for very little meat and, tough meat at that, had me pretty disappointed and in search of better options.

Turns out there are certain breeds of chickens that are used for laying eggs and different breeds used for meat.

How could I be so naive to think all chickens were the same? After some research, I found that the Cornish Cross Broiler chicken was among the favorites used for meat! In fact, the broilers are a specific cross of chickens that are intentionally crossed as meat birds. They grow fast, eat a ton, and are ready for butcher at approximately  8-10 weeks of age! 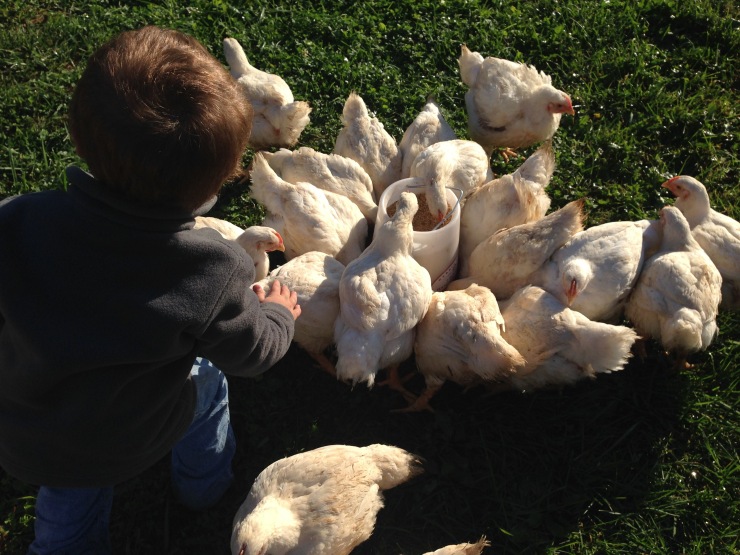 So we set out to order a round of Cornish Cross Broilers and await our tender, juicy, chicken breasts!

They were shipped from the Hatchery at just a day old (tiny).The post office called me when they arrived and alerted me of my chirping package.

For those of you getting concerned about the baby chicks lack of food or water, don’t fret, I can explain. I too was concerned of my chicks journey to my house until I learned that for the first 72 hours of life, hatchlings are still ingesting their yolk sacks that provide them with all the nourishment they need. So essentially baby chicks will be fine without food or water for up to three days. Just long enough to reach my local post office.

You can stop panicking now!

Anyways, post office called early one morning and told me they had my chicks. I wasn’t about to waste any time, so I threw my boys in the truck wearing their pajamas and I still had wet hair from the shower. In true farmer fashion we jetted off to the post office and retrieved our package of chirping baby chicks before I even got a chance to drink my morning coffee! 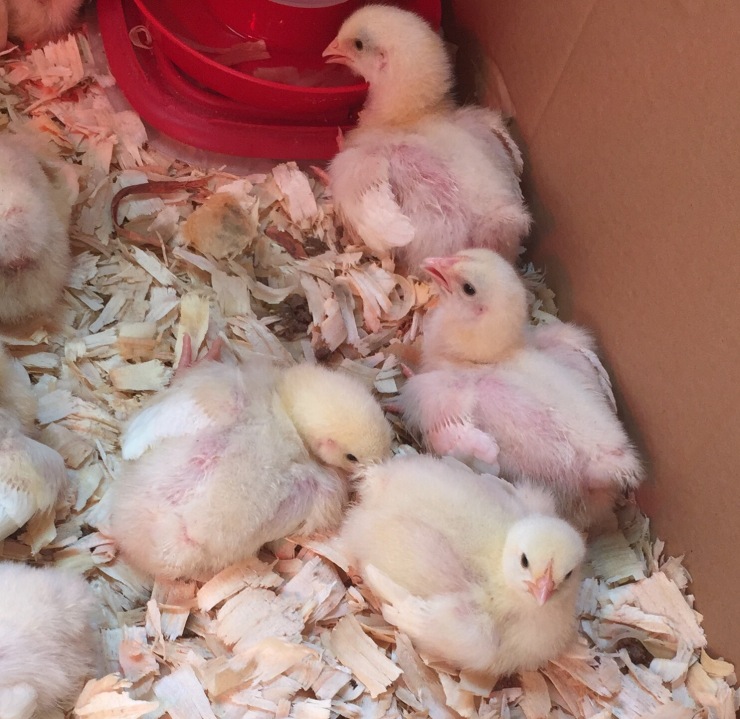 Once we got done ooing and ahhhing over their cuteness, we brought them home and got them set up in their temporary brooding home. They were a little weak from the journey (as expected) so I put a pinch of sugar in their water to perk them up. I also had to take each bird individually and dip their beaks in the water so they knew where to find it. Surprisingly, they didn’t hesitate to start eating the chick starter food, and they really never stopped eating it either.

For the first three weeks we kept them in my utility room in a box and under a heat lamp. They can’t regulate their body temperature on their own for the first few weeks so we kept the heat lamp on them and monitored the temperature,making sure it stayed between 90-95 degrees the first week. This process is called brooding. The heat lamp is an artificial form of heat that they’d naturally get from sitting under the Mama hen. Each week we’d lower the temperature by five degrees until they were ready to graduate to the chicken tractor outside!

In case your imagination is wandering again,let me fill you in on what a chicken tractor is. It’s not an actual tractor. No motor, no gas, no John Deere symbol. It’s just a mobile coop for the birds.

This type of coop allows them to have unlimited access to pasture, grass, and all the natural proteins,and also keeps them safe from predators. Each day, and sometimes several times a day, I would wheel the chicken tractor to a fresh spot of pasture. Not only did this method allow the chickens a natural habitat and diet, it simultaneously fertilized my ground! It’s a win win. Healthy, happy pastured chicken along with rich planting ground!

This saga of moving the coop went on for nine weeks until it was time for processing! And by processing, I mean butcher or harvest.

I’m not going to sugar coat it for you, I prefer to shoot it straight.

The Big Job Of Processing 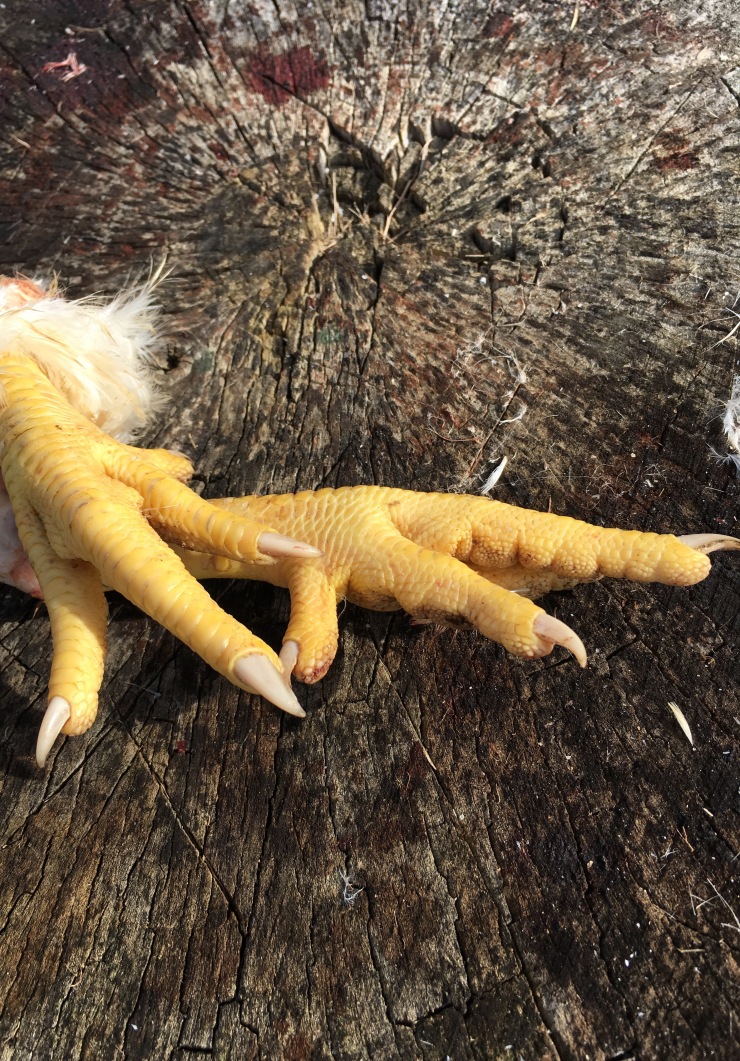 We decided it was important to us to process the birds ourselves. As weird as it might sound, we truly wanted to honor the birds that would soon feed us by killing them ourselves in the most humane way possible. It took an immense amount of team work and patience because it was just little ol me and my husband doing all the work.

After a lot of research, we found a couple of methods of culling that were deemed to be the most humane. One method involves putting the chicken upside down in a mounted cone and slicing the throat using a very sharp knife. While the chicken is upside down, it enters an almost hypnotic state. The state of hypnosis paired with a very sharp blade allows for the culling to be over quickly without a lot of pain.

The chicken is dead before they know it and it isn’t this big traumatic, intense event.

There is no chicken running around with their head cut off and no one gets bloody.

After the chicken’s throat has been cut, you allow the bird to bleed out. Next, you can either dress the bird out, skin it, and quarter up the meat, or you can start plucking feathers.

We opted to skin most of the birds because we mainly eat skinless chicken. However,we did end up plucking a few of them that we planned to roast whole. The feathers come out much easier if you scald the bird before plucking. This involves plunging the chicken into boiling water for a few seconds to loosen the feathers from the skin. The feathers slide right off after this, but the downside is the smell.

Scalded chicken feathers is unlike any smell I’ve ever smelled before. In fact, I’m pretty sure it’s burned into my brain.

Not pleasant, but necessary if you don’t want to eat feathers!

After we successfully processed all the birds, we let the meat rest in the fridge overnight before we packaged them. This method is a full proof way to ensure the meat will be tender.

Finally, I had a freezer full of tender, juicy, homegrown, pastured chicken!

Raising meat chickens taught me a few things about life and myself.

First, I learned it isn’t cheaper to raise your own meat, in fact it will likely cost you more in the beginning when your purchasing supplies and equipment on top of feed costs.

Secondly, I learned the extra cost and extra work is absolutely worth it to me. It’s comforting knowing that my meal was raised humanely and treated with care and compassion. It’s satisfying to know that the chicken on my plate only had to travel the short distance from my backyard to the kitchen.

Last but not least, I learned that next time I will not order TWENTY chickens at once! That was way too many chickens for two people to take on alone. Next time around I’m going to raise them in batches of ten or less.

Even though I’m still new at this farming, homesteading, self-sufficient thing, I can say without a doubt I’m in it for the long run. There’s nothing more satisfying than raising and growing the food your family eats everyday. If you’ve ever imagined taking the plunge into self-sufficiency, or even played with the idea of being less of a consumer, growing your own food is a good place to start. Just don’t start with twenty chickens!